Please indulge me while I “toot” my horn. Over
the years I have produced a dozen or so novels that touch on current events and
even anticipate them. They are about Islam, cultural and political corruption,
and frauds perpetrated on the citizens and the country by our self-appointed
elite. Here are synopses of their plots. They are all available as printed
books, on Kindle, and also as Audible versions. 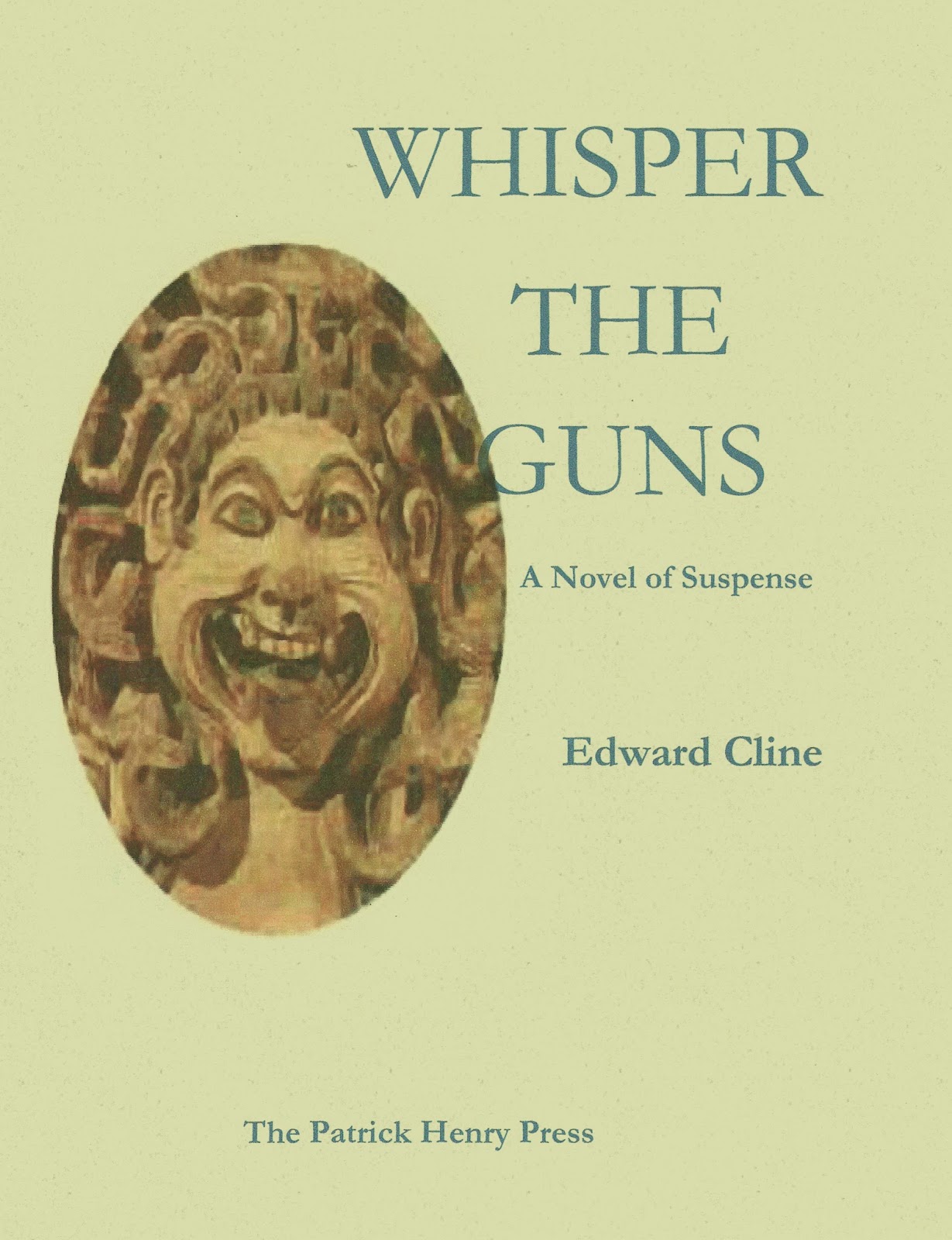 I begin with the
earliest series I had finished, self-published on Amazon, because no mainstream
publisher would touch it. It stars Merritt Fury, an American entrepreneur and
maverick capitalist who invariably runs afoul of the political and financial
establishments in America and abroad. The first title, Whisper
the Guns, is set in Hong Kong. But the most relevantly violent one is
the second title, We
Three Kings, in which Fury is targeted for death by a Saudi sheik with
the approving nod of our State Department. Sound familiar? The sheik gets his
comeuppance by story’s end, with Fury holding the sheik’s feet and other body
parts to the fire. I boldly adopted the Saudi royal emblem for the cover. No outrage
from the Riyadh medievalists yet.
Another series, published
by Perfect Crime Books in
Baltimore, Maryland features a detective hero, Chess Hanrahan, who specializes
in solving moral paradoxes. In Presence
of Mind Hanrahan encounters and engages in a contest of wits with two
denizens of the State Department, who subscribe to the policy of “cognitive
dissonance,” in order to put across a disastrous “peace” treaty with the Soviet
Union. Wishing hard enough for a preferred result will make it so. Hanrahan
jolts the celebrated denizens back to reality in the worst possible ways. In With
Distinction, he investigates a murder in the philosophy department of a
Midwest university (based on Michigan State University), and uncovers a snake
pit of plots to grant illiteracy and ignorance the highest academic honors, and
to rid the department of a reason-oriented philosophy professor. Sound
familiar?

The Hanrahan and
Fury novels were composed and finished in the mid-1980s. Their plots were
extrapolations of the political and cultural conditions of the time. I had no
sense then that things would grow much worse. Political correctness  in speech and written forms was not yet a
ubiquitous term of derogation of enforced conformity – although Marxists and
feminists were hard at work to impose PC, often successfully – while such
concepts as  “safe places,” “white
privilege,” and “trigger warnings” would have caused even the leftist
professors in academia to guffaw in laughter.
Shortly after the
second Hanrahan title, First
Prize, was published in 1988 and soon reviewed in The New York Times, I
received an invitation from the Western Illinois University Press to submit an
essay to a collection of essays by others on the art of detective fiction. I
sent my piece in (it’s included in Rational
Scrutiny), and waited, half certain that the piece would be rejected
because it went counter to the prevailing tone of criticism. It was indeed
rejected. The essay collection, sans
my essay, was published in October 1990 under the title The
Cunning Craft. Rather  than see
all the research for the essay go to waste, which was on how Dashiell Hammett’s
The
Maltese Falcon (first serialized
in Black Mask crime magazine in 1928-1929, and later published in book form by Alfred A. Knopf
in 1929), was not a “proletarian”
novel as many academics claimed, I decided to write a novel set in the same,
week, month and year as the Sam Spade novel was set, in December 1928. Thus was
born China
Basin, the first Cyrus Skeen novel

China Basin reflects many things, especially the state of the literary
and dramatic  arts. Skeen, who has just
returned from a tour of the Continent, over dinner discusses of the state of
current theater with two friends, who are theater critics. He says about a hit
play that is running in San Francisco and is slated to premier in New York City
:
“I mean that Olympus Deferred
is the slickest paean to transcendentalism I’ve ever seen, Herb. Ninety percent
of the serious drama penned and produced — and a significant volume of sly
boots comedy — says the same things as does Olympus, but not nearly as
well. Olympus answers no questions, takes no sides, and resolves no
issues. It hands approval to both the hero, who isn’t one, and to the
anti-hero, who isn’t anything. It bequeaths happiness to the weakling and pain
to the misanthrope. In a deft sleight-of-hand it sustains — not challenges —
the very conflict you’d expect it to resolve. It preaches tolerance for the
coward and the frightened, and tolerance for the loner. It rations equal
portions of value between the manqué  –
and the firebrand. It’s a vehicle of nihilism, Herb, the best yet to walk a
stage and send people’s minds abuzz. Everybody goes away happy; nobody is asked
to take sides; nothing is affirmed or denied. In that respect, Olympus
is not controversial.”

Castle and Kripps listened to
him with interest and asked him many questions. They even joined in a few
choruses of laughter. But Skeen knew that their eagerness had been doused by
the argument over Olympus Deferred. When he began to report in detail
the things he had seen in Germany — particularly in the theater, and the
influence of Dadaism, Surrealism, and Neo-Expressionism in the other arts —
Kripps’s attention became more pronounced.
Finally, Kripps interjected,
“Well, Hardenberg’s to blame for that ‘word salad’ nonsense. Lessing, Kant,
Herder, Schopenhauer — that whole crowd is behind the unbelievable insanity you
saw there, Cyrus. We can even see it sprouting here. For example, in the
theater — the serious theater — Olympus Deferred is archetypal. ”

One of the
critics is eventually murdered, while the other commits suicide. It turns out
one of them wrote Olympus Deferred,
whose authorship is being claimed by psychopathic murderer, but the critic who
wrote it doesn’t dare admit it. He is being blackmailed.

The Skeen series
is long and adventuresome, spanning the 1920s decade and then some. I am
currently working on the 21st Skeen detective novel. I find that I can no
longer set a detective novel in my own time. Political correctness, government regulations,
and the general tone and content of contemporary culture make a hero such as Cyrus
Skeen impossible. I am comfortable working in Skeen’s time – historian Paul
Johnson once wrote that the 1920s was the last decade in which America was what
it as meant to be, Prohibition and some federal intrusions to the contrary notwithstanding
– and Skeen is free to act without the kind of self-conscious restraints that
bedevil fictional heroes today. Skeen and I both have a freedom of action,
speech, character, and manners which in our culture today are alien and unwelcome.
Neither Skeen nor I must jump through federal and cultural hoops to get things
done. And Skeen and I are thinkers and take ideas seriously. Skeen, at least,
is a threat to those who fear his crime-solving prowess and panache.

Skeen ventures
into realms few other fictional detectives are equipped to move effortlessly
in.

In Civic
Affairs he is asked to apologize for his rough treatment of criminals.
He laughs at the preposterous idea and kicks the advocates of the idea out of
his office. In Sleight
of Hand he is asked by a pair of professors from the University of
Wisconsin to stand for the office of Public Defender in the coming local city
elections; he also laughs at the idea. He learns that the former Public
Defender was murdered to make room for another candidate (not Skeen who would
also be murdered) who would introduce Progressive issues into the campaign. In Stolen
Words he proves that a jailed writer did not murder his publisher, but
he also learns that the writer and publisher had made a business of plagiarizing
many American classics. The Circles
of Odin pits Skeen against a cabal of occultists who are on a murder
spree to eliminate “useless” people (echoes of Alfred Hitchcock’s Rope, although I didn’t
realize the film’s influence on me until after the title was published). 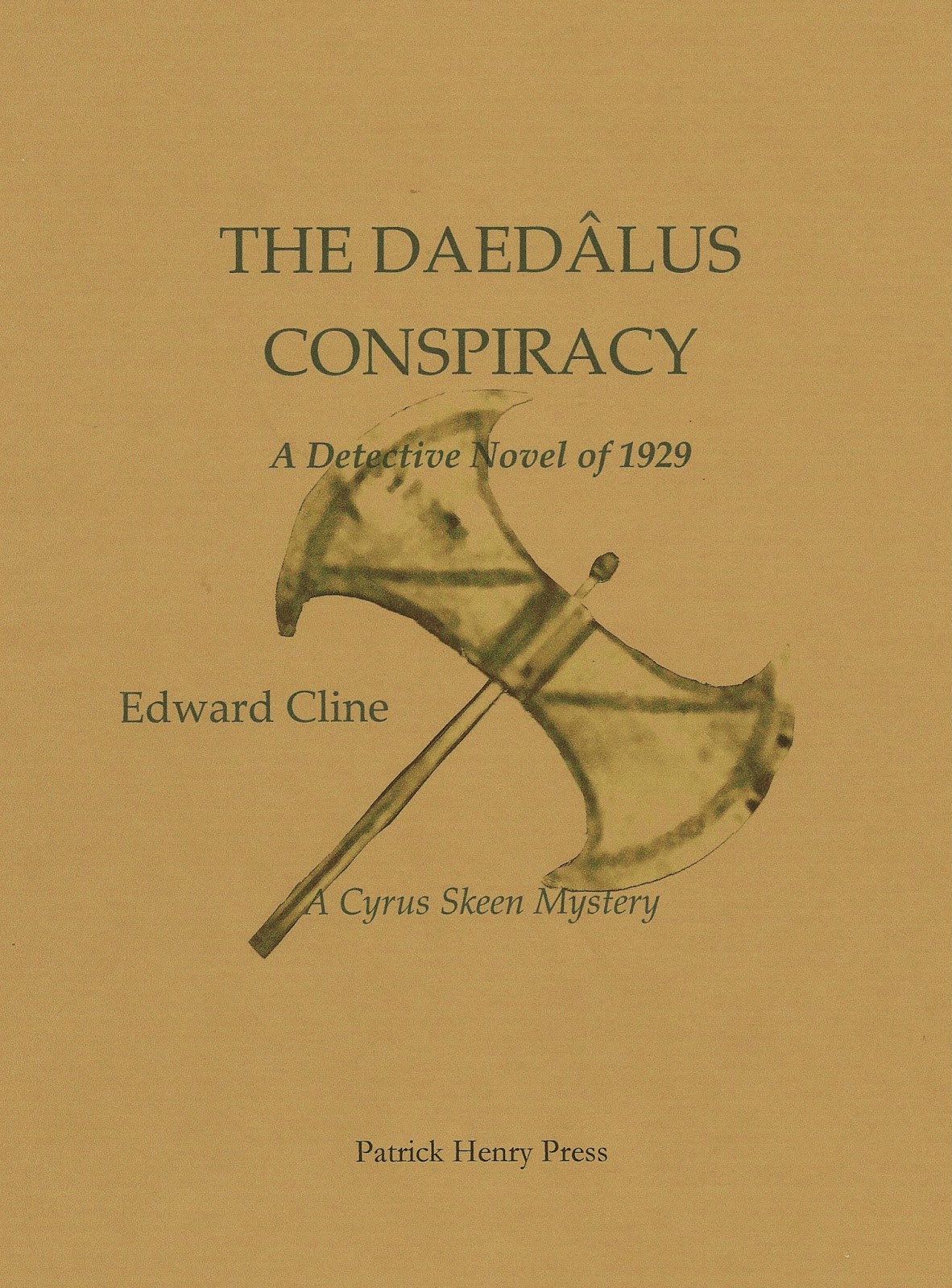 Skeen is not
averse to tackling “big time” issues. In Exegesis
Skeen tracks down the persons responsible for murdering ex-convicts;  throw in the murder of a retired Wisconsin Supreme
Court justice and Skeen’s plate is full.  In The
Daedàlus Conspiracy he journeys to Monte Rio to attend the annual
outing of the country’s elite, businessmen, politicians and cultural leaders to
abort the assassination of a U.S. Senator. Wintery
Discontent finds him hired by an Austrian diplomat who wants to
introduce a scheme to the Western allies that would predate the European Union,
but fears for his own life.


This caper is linked to a subsequent plot in Seeing
Double, in which the Soviets hatch a scheme to discredit the allies
with a bogus plan to invade and overthrow the Soviet regime. Skeen’s murder is
integral to the plan – he was supposed to be the disgraced courier of the
invasion plan – but the resourceful detective foils it.

Politics is not
the usual focus of Skeen, but often it is unavoidable. In The
Chameleon he solves the murder of a businessman by a member of a
nascent Nazi bund near Stanford University. That episode begins with a bounced
check. A
Crimson Overture introduces him to the web of Soviet espionage when a
British artist he and his wife have befriended is murdered. The lady was a
British spy. And in
perhaps his most ambitious case Skeen tackles The Muslim Brotherhood,
in The
Black Stone, when he investigates the brutal murder of a Jewish girl
and the torture/death of a New York newspaper

reporter who stole the sacred
Black Stone from the Ka’aba in Mecca.

Finally, in the
latest Skeen affair, Trichotomy,
the detective, something of a man of letters, is invited to address a sociology
class about an article of his that was published about the behavior of recidivists,
only to witness the classroom murder of the professor who invited him. It is
both an allegory and a Roman à clef. Sound familiar? First
Things begins on a light note when a shy, gawky teenager asks Skeen to
find his missing girlfriend; amused at first, Skeen uncovers a years-old charity
racket that enslaves adopted girls a la
ISIS and the Yazidis, except that the slave brothel is in San Francisco.

As can be seen,
the Skeen mystery novels span a wide range of issues and subjects,  every one of them requiring the attribute of
thought and a moral code and often Skeen’s brazenly impolitic style and
approach to problem-solving. They are not merely mystery novels. They are
introductions to a time and a spirit when thought and reason were not under siege and virtually
banished from one’s life and values. In a sense they are of our own time, because
I wrote them in this era.
Skeen is aided in
many cases by his loving artist wife, Dilys, and by Mickey Kane, a newspaper
reporter who reports facts, not opinions or bias.
The pillars of
Western civilization are now under attack – in politics, in our own government, in art, in education, in our justice system –
and one purpose of mine is to demonstrate that the pillars needn’t be discarded if one is willing to fight for them. They can
be discarded and lost only at one’s peril and ultimate demise.
Cyrus Skeen, Chess Hanrahan, and Merritt Fury may not
belong to our own time, but they can become presences in one’s own life.