“Get
out!!” bellowed Quamisi, jumping up and overturning the coffee service,
which tumbled off the desk and clattered to the rug, the pot’s contents
spilling over the colors. .…”Get out, killer of my brother!!”  Weakened with pent-up rage, Quamisi leaned
with both arms on the desktop. “I will have you, and I will have that coin!!”
“Of
course you will,” replied Fury. His expression had turned to mild contempt.
“When the sun rises in the west.” Then he turned and left the room.
Excerpt from We Three
Kings 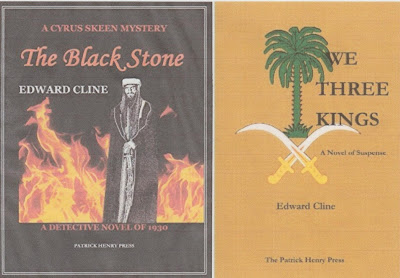 My very first completed novel, finished sometime in
the early 1970s on an Underwood manual typewriter, was a dystopian one, In the Land of the Pharaohs,  set in the future in a New York City under the
thumb of a fascist dictatorship. I don’t even recall the year I typed the last
page of it. I managed to find representation for it by a literary agent, the
late Oscar Collier, who was unable to interest a publisher in the novel. The
story  centered on the exploits of a
homicide detective, Kenticott Coldiron, who eventually encounters a gang of
patriots who raid the fortress-like Federal Reserve Bank in lower Manhattan and
make off with its stash of gold bullion.

There was in 2008 a political and literary dust-up
over a very minor pseudo-bodice ripper, The Jewel
of Medina, by Sherry Jones, which depicted the life of an adult Aisha,
Mohammad’s luckless child bride of six or seven (a marriage consummated with
great difficulty, one imagines, by the time she was nine). The book was
originally to be published in the U.S.
by Random House and in Britain by Gibson Square. Random House,
frightened off by a nebnose literary critic at the University of Texas who
warned of rioting in the streets should the “blasphemous” novel see the light
of day, cancelled plans to publish the book. It shelved it out of fear of
violence to its property and staff by froth-sputtering Muslims, while Gibson
Square’s publisher’s house was actually firebombed by Muslims.

The novel was eventually published in the U.S. by a
small house, Beaufort Books without a single chanting demonstrator darkening
its doorstep.  See the whole sorry
episode of hand-wringing and chattering teeth here. I have
flipped through the book in Barnes & Noble. All I can say about it is that
Sherry Jones is member of the “Writers of the Purple Prose” school of authors.
Mohammad, a rapist, a butcher, mass murderer, and a thief, comes off looking
like mild-mannered Jim Anderson of “Father Knows Best.” Many
critics gave the novel a patronizing pass.
Publishers Weekly thought the novel portrayed
Mohammad as “caring, progressive and politically savvy,” and opined that “A’isha
grows from a self-centered child to a worldly woman whose advice and counsel
are a source of comfort and strength to Muhammad. The subject matter here is
more spectacular than the writing, which tends toward the maudlin and purple.
It’s a page turner, but not outstanding.”
But one must wonder: A writer of Sherry Jones’s
caliber could probably romanticize the courtship of Hitler and Eva
Braun. The Jewel of Medina was followed by The Sword of Medina. See my discussion of the novel here, “Firebombing  Freedom of Speech” from 2011, and the
two  “Sensitivity Syndrome” columns, here
and here
from 2008.
There have been some Islamic novels of a
totalitarian bent, set in the future. Most of them are absurd in their premise.
Their authors simply do not understand the nature and ends of Islam. Much is
made, for example, of Robert
Ferrigno, an American detective novelist who after 9/11 turned out a
trilogy of novels which imagined America broken up into two major regimes after
Iran (presumably) has nuked New York City and Washington, D.C. (and also
Mecca), the Islamic Republic or the Islamic States of America, and the Bible
Belt. Genetic engineering enables the protagonist to slam-bang his way through
the three stories to torpedo the machinations of a 150-year “Old Man,” whom I
suspect Ferrigno may mean George Soros. His mission: recover a piece of
Christ’s cross buried in an underground bunker in the ruins of Washington, D.C.
to foil the Old Man’s plan to establish a continental caliphate. Right.

Published just this year, in unexpected conjunction
with the massacre of the Charlie Hebdo staff in January, is French author Michel
Houellebecq’s Submission,
set in 2022 France, when an Islamic political party dominated by the Muslim
Brotherhood wins the elections and assumes power. The new president instantly
imposes Sharia law on all French citizens. The protagonist – certainly not a
hero – is a sleep-around academic who is indifferent to politics, until he’s
offered a high post in the New Sorbonne, on condition that he convert to Islam.
He’s also promised three wives. He submits.
Critics have gone wild over the novel. The New York
Times liked it so much it ran two reviews of it, one by Karl Karl Ove Knausgård and another by
Michiko Kakutaninov. Knausgård’s
review is nearly novelette in length at some 5,000 words, and is so dense with
existential angst it discourages comprehension.
Here is a sample:
This
is the only place in the novel that opens up for the idea that the emptiness and
ennui that François [the alleged protagonist] feels is not just universal, a
kind of existential condition applicable to us all and which most people hide
away behind walls of illusion, it may also have individual causes. That is
somewhere he doesn’t want to go, and thus a vast and interesting field of
tension is set up in the novel, since the narrator is a person who is unable to
bond with others, feels no closeness to anyone, not even himself….etc and etc.
Kakutaninov’s
review is a modest 950 words. Here is a taste of it:
Mr.
Houellebecq’s writing tends to be highly derivative of earlier writers,
including Céline and Camus. His novels are hobbled by clumsy speechifying from
supporting characters who exist only to give voice to political or
philosophical points of view or to serve as objects of the hero’s contempt. His
protagonists are simply variations on one odious type — self-pitying,
self-absorbed and misanthropic men who have a hard time feeling any emotion
other than lust, and who regard humanity as a “vile, unhappy race, barely
different from the apes.”
And so on. Not exactly an invitation to run out to
pick up a copy. Most of the reviews of Submission
I’ve read of the novel are like that; tentative pats on the back for the author
with some throat-clearing reservations. The astounding thing is that anyone
would bother to review it.
M.L. Stewart seems to be a popular writer in the
U.K., and his dystopian thriller, The
United Kingdom of Islam was apparently met with critical and reader
praise. Goodreads
offered a decent synopsis of the story, and readers on Amazon were unanimous in
their acclaim. To judge by reader appraisals of the novel on Amazon, it seems
to be much more realistic about the imposition of Sharia law on Westerners and
its gruesome consequences.
We should not forget the alternative
history/dystopian genre. Prominent in my mind are Robert Harris’s Fatherland,
which depicts a Nazi Germany that triumphed in WWII and now desperate to hide
the secret extermination of European Jews from President Joseph Kennedy, Sr. on
the eve of a meeting between him and a 70-year-old Hitler to establish a rapprochement;
and The
Man in the High Castle, by Philip K. Dick, which paints an America partitioned
by a Nazi Germany and Imperial Japan. I’ve read Harris’s novel and watched the film of it, and both are
fairly meticulous in their details (but, overall, literally incredible). I read
High Castle years ago, and while it
was suspenseful, it bored me. It is now a lushly produced Amazon Original TV series. Neither of these works deals with Islam.
My objection to such dystopian stories is one I share
with Ayn Rand: Dictatorships and totalitarian regimes cannot sustain themselves
if they destroy or regulate the freedom to think, speak, and act. At best, they
can leech off of neighboring semi-free, productive states. If those collapse
economically and/or politically, then the super-tyranny will shortly follow
suit.  Such stories can be told for
ulterior reasons, as Orwell’s Nineteen
Eighty-Four was written not to be taken literally but to convey a message about
how suppression of thought and expression can be possible even in a semi-free
society.

Catastrophic Failure: A Review, Part I