First you laugh. Or make a face of incredulity. You shake your
head in wonder about the mental health of anyone who would pay nearly $143
million for “doodle art” that looks water-damaged, or perhaps was
done DUI – drawing under the influence of alcohol.

Carol Vogel in the New York Times reported on November 12th  on the above “art,” “Bacon’s Study of Freud Sells for $142.4 Million,” and that
For at least 10 minutes Christie’s overflowing
salesroom watched in rapt attention as a 1969 triptych by Francis Bacon [no, not the Elizabethan philosopher,
statesman and scientist] sold for $142.4 million, described as the highest
price ever paid for an artwork at auction. (This was the original opening of
the New York Times article; the article was later revised.)
It took seven superrich bidders
to propel a 1969 Francis Bacon triptych to $142.4 million at Christie’s on
Tuesday night, making it the most expensive work of art ever sold at auction.
William Acquavella, the New York dealer, is thought to have bought the painting
on behalf of an unidentified client, from one of Christie’s skyboxes
overlooking the auction.
The price surpassed the nearly
$120 million paid at Sotheby’s in…2012 for Edvard Munch’s fabled pastel of
“The Scream,” even after adjusting for inflation. It also topped the
previous high sale for the artist at auction set in Sotheby’s in 2008, just as
the art market was peaking, when Sotheby’s sold a 1976 Bacon triptych to the
Russian oligarch Roman Abramovich for $86 million.
Seven bidders vied for the painting –
“Three Studies of Lucian Freud” – that depicts Bacon’s friend and
rival, Lucian Freud [yes, appropriately
enough, a grandson of Sigmund Freud] , sitting on a wooden chair against an
orange background. It ended up selling for $142,405,000. [Final prices include
the commission paid to Christie’s, Sotheby’s and other “glamour” auction
houses, including percentages ranging from 20 to 12 percent.] Italics and brackets mine.
The question is: Did Bacon (1909-1992) not much like his
“friend” Lucian Freud that he mangled his face? What is the purpose
of the rhomboid box? Is there something wrong with the purchaser? Does he
really “appreciate” it? Has he nothing more productive to do with his
money than throwing it at rubbish? Or is this his way of investing in insanity,
of betting on nihilism, of gambling on the irrational, hoping the market for it
will increase its value in the future?
It is difficult to answer any of those questions. While the
irrational and the illogical can be examined, only the living, breathing vehicles
of the irrational and illogical can answer, be they the “artists” or
the tasteless, status-seeking parvenus.  The
market for the irrational in art has certainly kept in pace with inflation and
the irrational in political trends.
Lucian Freud (1922-2011) was a “friend and rival’ of Francis
Bacon. How so? Here are examples of Freud’s work. 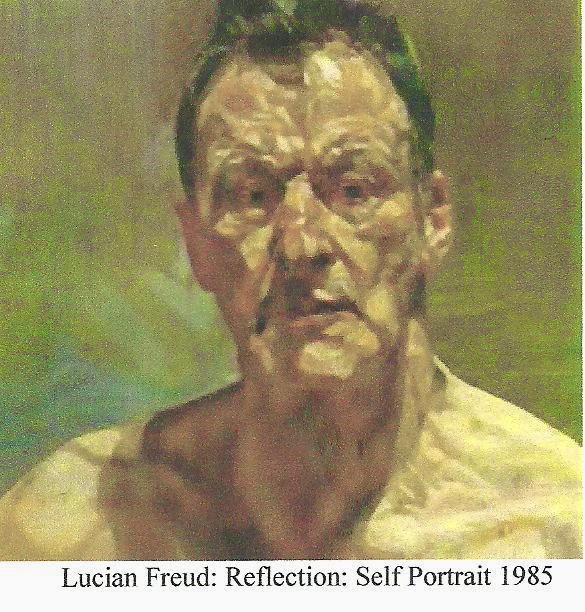 And this revolting “realism”:

You can readily see why Freud was a “rival” of Bacon’s:
He believed in painting subjects as he “really saw them,” as
opposed to Bacon’s anti-epistemological exercises in madness. However,
the question is: Would you really want to contemplate the sleeping supervisor?
Is this really a proper object of artistic recreation? Would you want this
hanging on your wall? Would you want anyone to know that you own it, or that
this is your conception of “good” art?
Further, all Freud’s self-portraits (the one above is only one of
many) seem to suggest that he was poisoned with the same kind of dioxin that
was fed to Ukrainian president Viktor Yushchenko in 2004 in an assassination attempt. Sadly, Yushchenko  may have to appear in public as part of his
job, but I very much doubt he would want his scarred face rendered into an
iconic symbol.
Some of Freud’s work is, at best, inoffensive, of the caliber of pretentious
mediocrity and amateurishness one can see in the typical town art fair, right
next to a booth that sells hand-crafted jewelry and other junk. Bacon’s work,
however, is evocative of Brad Pitt’s stellar spiel as the nattering psychiatric
inmate in Twelve Monkeys
(1995). But most of it is what I would call “grunge” or “kitchen
sink” naturalism. Freud’s work can be characterized as the image of a
manic depressive.
Carol Vogel also reported
in the revised Times article:
When the bidding … finally stopped, after more
than 10 fraught minutes, the overflowing crowd in the salesroom burst into
applause. Two disappointed bidders could be seen leaving the room. “I went to
$101 million but it hardly mattered,” said Larry Gagosian, the super-dealer who
was trying to buy the painting on behalf of a client. Another contender was
Hong Gyu Shin, the director of the Shin Gallery on Grand Street in Manhattan,
who said he was bidding for himself.
These haute art auctions
are also social events.
The sale was also a place to see and be seen.
Christie’s Rockefeller Center salesroom was standing room only, with collectors
including Michael Ovitz, the Los Angeles talent agent; Aby Rosen, the New York
real estate developer; Martin Margulies, from Miami; Donald B. Marron, the New
York financier; and Daniel S. Loeb, the activist investor and hedge fund
manager.
All birds of a feather yearning after fool’s gold. Jason and the
Argonauts at least searched for Phrixus’s Golden Fleece. No matter what price
is paid for any of Bacon’s work, the purchaser is being fleeced of a fortune. His
artistic values, his money, and his “prestige” are all “owned”
by the fraudsters in art and in the art “marketing” realms, from
gallery owners to auctioneers.
Vogel reported in her May 2012 New
York Times article, that the salesroom crowd also applauded the sale of Munch’s
“The Scream”:
It took 12 nail-biting minutes and five eager
bidders for Edvard Munch’s famed 1895 pastel of “The Scream” to sell for $119.9
million, becoming the world’s most expensive work of art ever to sell at
auction.
Bidders could be heard speaking Chinese and
English (and, some said, Norwegian), but the mystery winner bid over the phone,
through Charles Moffett, Sotheby’s executive vice president and vice chairman
of its worldwide Impressionist, modern and contemporary art department. Gasps
could be heard as the bidding climbed higher and higher, until there was a
pause at $99 million, prompting Tobias Meyer, the evening’s auctioneer, to
smile and say, “I have all the time in the world.” When $100 million was bid,
the audience began to applaud.
The price eclipsed the previous record, made two
years ago at Christie’s in New York when Picasso’s “Nude, Green Leaves and
Bust” brought $106.5 million.
Fools and their money are soon parted. Shall we scream? Or laugh?
Vogel mentioned the price paid for one of four renderings of Munch’s
“The Scream”: 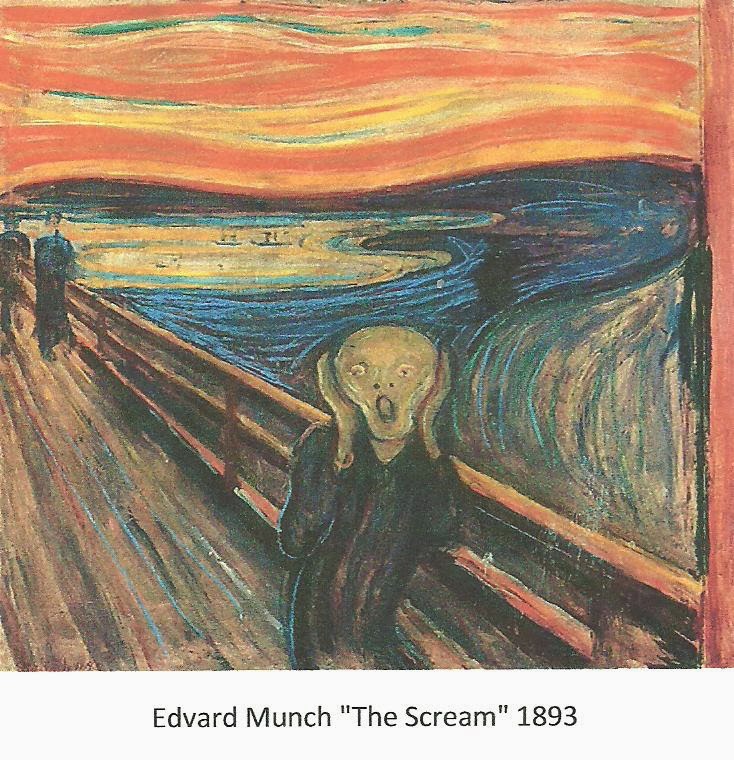 There are several explanations for Munch’s symbolic cry of angst,
pain, and hopelessness. Munch himself
wrote:
“One evening I was walking along a path,
the city was on one side and the fjord below. I felt tired and ill. I stopped
and looked out over the fjord—the sun was setting, and the clouds turning blood
red. I sensed a scream passing through nature; it seemed to me that I heard the
scream. I painted this picture, painted the clouds as actual blood. The color
shrieked. This became The Scream.”
Slate
offers another tale, one appropriate to the subject:
Alternatively, it has been suggested that the
proximity of both a slaughterhouse and a lunatic asylum to the site depicted in
the painting may have offered some inspiration.
Ayn Rand, the novelist/philosopher, wrote in her article,
“Art and Cognition”:
Art is a selective re-creation of reality
according to an artist’s metaphysical value-judgments. Man’s profound need of
art lies in the fact that his cognitive faculty is conceptual, i.e., that he
acquires knowledge by means of abstractions, and needs the power to bring his
widest metaphysical abstractions into his immediate, perceptual awareness. Art
fulfills this need: by means of a selective re-creation, it concretizes man’s
fundamental view of himself and of existence. It tells man, in effect, which
aspects of his experience are to be regarded as essential, significant,
important. In this sense, art teaches man how to use his consciousness. It
conditions or stylizes man’s consciousness by conveying to him a certain way of
looking at existence.1.
About Modern Art, she had this to say:
As a re-creation of reality, a work of art has
to be representational; its freedom of stylization is limited by the
requirement of intelligibility; if it does not present an intelligible subject,
it ceases to be art.2.
What are the tell-tale symptoms of those who create Modern Art and
those who “consume” it?
Decomposition is the postscript to the death of
a human body; disintegration is the preface to the death of a human mind.
Disintegration is the keynote and goal of modern art—the disintegration of
man’s conceptual faculty, and the retrogression of an adult mind to the state
of a mewling infant….
To reduce man’s consciousness to the level of
sensations, with no capacity to integrate them, is the intention behind the
reducing of language to grunts, of literature to “moods,” of painting to
smears, of sculpture to slabs, of music to noise.3.
Rand ended her article with:
There is no place for whim in any human
activity—if it is to be regarded as human. There is no place for the unknowable,
the unintelligible, the undefinable, the non-objective in any human product.
This side of an insane asylum, the actions of a human being are motivated by a
conscious purpose; when they are not, they are of no interest to anyone outside
a psychotherapist’s office. And when the practitioners of modern art declare
that they don’t know what they are doing or what makes them do it, we should
take their word for it and give them no further consideration.4.
Which we will not give them here. I think the
point has been made.
What is an antidote to the irrational and
illogical in art? I can offer many examples, very, very few from my own
lifetime, and many before it, but one comes to mind almost immediately:

Malika Bouabdellah Dorbani, who wrote the Louvre
article on the painting, summarized the meaning of Delacroix’s work and also
the transition from this caliber of art to the decomposition (or
deconstruction) of art in the 20th century:
Delacroix’s historical and political painting—a
blend of document and symbol, actuality and fiction, reality and allegory—bears
witness to the death throes of the Ancien
Régime.
This realistic and innovative work, a symbol of
Liberty and the pictorial revolution, was rejected by the critics, who were
used to more classical representations of reality. Having hailed the accession
of Louis-Philippe, the work was hidden from public view during the king’s
reign, and only entered the Musée du Luxembourg in 1863 and the Louvre in 1874.
It is now perceived as a universal work—a representation of romantic and
revolutionary fervor, heir to the historical painting of the 18th century and
forerunner of Picasso’s Guernica
in the 20th.
It will take the same romantic and revolutionary fervor to ignite
a renewal of the Romantic school of art, to see the works of artists whose
pro-life and pro-existence metaphysical value-judgments are worth contemplating
and worth the money, to see such work flourish and be rewarded with a justice
that is completely absent in our time.
Then the works of the Bacons and Freuds will be consigned to the
dust heap where they have always belonged.
1. “Art and Cognition,” by Ayn Rand,
in The Romantic Manifesto. New York:
Signet/New American Library, 1971. p. 45.
2. Ibid, p. 75.
3. Ibid, pp. 76-77.
4. Ibid, p. 78-79