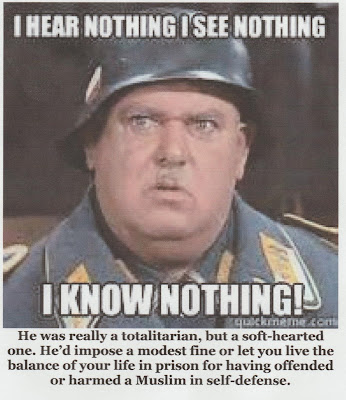 That was
Sergeant Hans Schultz’s favorite and well-known refrain in Hogan’s Heroes, which
ran on CBS from 1965 to 1971. In the linked clip, he adds, “I was not here! I
did not even get up this morning!”
Suppose you
had a chance to chat with the real-life Sgt. Schultz’s in Germany, Sweden,
Norway, Denmark. The “interfaith” dialogue would go something like this, after
you’ve reported a crime committed by a Muslim.
Sgt. Schultz will
claim that he knows everything, he was there, and that you should go back to
sleep and pretend nothing ever happened. You were not raped by a Muslim or a
gang of Muslims. You did not have your head kicked in by a gang of Muslims. You
were not robbed by a Muslim. Or stabbed,
or groped, or spit on by a Muslim on a train or on the street. Or even raped
and then disfigured by a Muslim. Or by a “refugee,” or by an “immigrant.”
All right,
Sgt. Schultz would concede. All or one of those things happened to you. There’s
no denying the facts, is there? But if you fought back, and used illegal means such
as pepper
spray to deter your assailant, then you must be punished. Your fighting
back is evidence of bigotry, or racism, of being anti-Muslim or anti-Islam or
anti-immigrant. Of your lack of patriotism! Those states of mind are illegal,
as well, and must be corrected.
You must allow
yourself to be raped, robbed, and spit on. It’s your duty to submit to the diktats
of Islam. You must submit to Sharia. Horridly primitive system, yes. But, who
are we to judge? You may not survive the experience, but it’s an issue of
sacrifice. Of self-sacrifice for the greater good. For the nation. Sweden,
Denmark, Norway, Finland, Germany, even Italy – all of our lily-white
societies, have a duty to be invaded and assaulted by Muslims and others. We have
a duty to relieve the suffering they endured in the countries from which they
came. We have no right to assert that our morals and our society are superior
to the cultures of the immigrants. We have no right to impose them on
immigrants, even here. That is the height of cultural hubris and civilizational
imperialism. Okay, so the perpetrator was Somalian.
And he hates whites, even though Sweden was not a party to the downfall of
Somalia. Or Ethiopia. I’m a little foggy on the history of that part of the
world. So what?
Don’t you
understand that when a black- or brown- or olive-skinned male immigrant rapes a
Swede or a German, it’s what the Americans would call “payback” for the
destruction and looting of the immigrant’s home country? And even if the destruction
and looting are purely imaginary, and you or your ancestors had nothing to do
with it, you’re still guilty. The purpose is to humiliate and degrade the
victim, to demonstrate who’s in charge now. You may call it racism on his part;
but from his perspective, it’s reparations. Sure, it’s racism. But it’s
justifiable racism. Also, It’s a religious requirement to rape non-Muslim women,
and beat up non-Muslim men within an inch of their lives. I suspect that’s just
an excuse for a super-excited Muslim to get his jollies off, but don’t tell
anyone I said that.
You say you
have a right to know what’s going on in the country, about all the crimes
committed by Muslims and other immigrants? Gott im Himmel!  How naïve of you! No,
you don’t have a right to know! Nobody not in government or the police forces
has a right to know! If people knew, there’d be a furious backlash at
immigrants, and Muslims, they might be attacked, and hurt, or even killed!
But you say they have a right to attack, hurt, and
even kill native Swedes, and Danes, and Germans, without much consequence, just
a slap on the wrist? But, that’s their culture, and we can’t punish them for
acting out their culture! That would be…discriminatory! And that’s unthinkable!
We don’t want to be charged with racism, or religious bigotry, or
anti-Muslimism! God, if we reported every one of the 5,000 or more crimes
committed by Muslims, we’d have to deport the whole lot of them! Or jail them. The
newspapers would run out of space to report them all! But, they’ve saved themselves
the trouble of being disciplined for reporting news we don’t want reported. They
don’t want to start a panic, either!

There’s a
fellow in America who ought to be silenced, Daniel
Greenfield, he helped to spill the beans on our secret Code 291 policy, which
is to secretly compiled statistics on Muslim and immigrant crimes committed in
Sweden but not report them to the public. He wrote such slanderous things about
our law-enforcement efforts. He made much of that silly goose, Alexandra
Mezher, who got herself killed trying to break up a fight between “asylum
seekers children.” Poor girl, but that’s the risk you take when you do the
right thing and help adult
children settle into our lovely country. I feel no remorse for her. Sooner or
later she was going to be sexually assaulted, but that’s neither here nor
there. So it’s good she’s dead. But this Greenfield fellow, he wrote – and don’t
you go broadcasting this to anyone else, not even to your parents, or else you
can be charged with hate speech and that carries a heavier penalty than using
illegal pepper spray, or Mace:
The people at the top wanted
an overview of the crisis, but they did not want the public to know what was
going on. That was what
Code 291 was for….
Police would not disclose
details of the resources spent on work with refugees and migrants.  This
despite the fact that the agency kept separate statistics on this using the
secret code “291” .
This is not how democracies
work. This is not how free countries work. This is how totalitarian states
work.
European governments are
deliberately hiding information about Muslim migrant crimes from the public. They
are covering up attacks, intimidating witnesses and even visiting the homes of
people who criticize this
on Twitter to intimidate them.
This is what a totalitarian
system looks like. Code 291 should be a rallying call to bring down the iron
curtain of collectivist bureaucracy and expose the truth about its migrant
hordes.
What libelous,
xenophobic rubbish! We are not totalitarian!
What a nasty slur! We are a caring regime. Sometimes we overdo it, but it’s all
for your own good. It’s all for the general good. You can’t create a model society
of diversity and multiculturalism without breaking a few traditions or taboos
or heads.
Are you saying
that the Swedish and German and Danish police have become allies of the criminals?? That suggestive libel has earned you
extra two years in clink! So what if the Cologne
police have erased all visual record of the mass assault on women there on
New Year’s Eve? It’s for the public’s own good. That great prophetess Chancellor
Angela Merkel, is determined to make Germans and Germany pay for its past
crimes, even though most Germans alive today had nothing to do with Nazism,
they weren’t even born yet!
Still, it’s
the cultural and political heritage thing, you know, and their inherited “white
privilege” that must be paid for. And so what if no Somali or Iraqi or Turk or
Syrian never discovered a new law of physics or invented new medical procedure
(other than beheading!) or composed anything worth listening to. They come from
brutal societies with their own cultural heritage. We mustn’t be judgmental
now. Or else you spend a night in the box! Love that American phrase! But that
Greenfield writer is definitely not
to my taste! Our dear friend Mr. Mark Zuckerberg
ought to shut him up! Hate speech just causes problems. Hate is contagious, you
know, especially if the object of hate is, well…hateful. And you can hate all
of these immigrants, but also feel sorry for them.
Now, if you can’t
pay the 5,000 Euro fine, you’ll have to be cuffed and taken away. We have a new
recruit in uniform now. His name is Abdul Rahman Abunasir. He is from Syria…think.
He is eager to escort you to prison, and will see that you are comfortably
settled in your new cell. But, before you submit to his handcuffs, I advise you
to wear a headscarf to cover your hair and wear an ankle-length skirt.
Otherwise, he
might be provoked and get mad at you…or something.
I am not a
dumb person, young lady. There isn’t anything I don’t know. Sergeant Schultz at
your service! Deaf to your screams, blind to your suffering, and mute on policy!

A Preview of Manhattan Blues