Some Cheap Shots at Islam

Permit me some levity and incidental observations
about Islam. It’s a stress reliever. And I need to laugh occasionally;
otherwise I’d curl up in a fetal position and suck my thumb. Not really. But I
do need to vent my inner humor
For starters, it would be interesting to delve
briefly into the psychological and character makeup of the man the Muslim
Brotherhood (MB) and the Organization of Islamic Cooperation (OIC) have
practically elevated to sainthood, Sayyid Qutb. He is the prissy Muslim squirt
whose various scribblings are held in such high esteem by the Ummah. Qutb (1906-1966) wrote Milestones, which is considered such a basic,
fundamental document in the Islamic literature, that it may as well be treated
by infidels (looking in from the outside) as an extension of the Koran. Omar Sacirbey in a February 2011
Washington Post article called him the Muslim Brotherhood’s “intellectual
godfather.”

Beginning in 1948, Qutb spent about two and a half
years in America (with some little time in Washington, D.C. and Palo, Alto,
California), attending a college in Greeley, Colorado. He was sent there, as
the story goes, by his friends in the Egyptian ministry of education to get him
out of harm’s way from the Nasser government, which was beginning to be annoyed
by the Muslim Brotherhood’s call for a return to Islamic purity. Qutb was
showing signs of sympathizing with those calls. As Robert Irwin, in a Guardian
article of late October 2001, put it:
Everything
changed in 1948 when he was sent to study education in the US. It was a fateful
decision. Perhaps those who sent him thought that it would broaden his
horizons.
Instead, the sojourn in Colorado shriveled his
horizons. He was alienated by American culture and society. He wanted to be a
“good” Muslim, not a part-time Muslim. That meant renouncing virtually all
earthly temptations and pleasures.
Almost
immediately his newfound resolve was tested on the [ocean] liner, as a drunken
American woman attempted to seduce him. Qutb did not succumb, nor was he later
won over by the charms of the American way of life. He was repelled by
prejudice against Arabs and shocked by the freedom that American men allowed
their women. He described the churches as “entertainment centers and
sexual playgrounds”. After two and a half years of exposure to western
civilization he knew that he hated it and, on his return to Egypt in 1951, he
joined the fundamentalist Muslim Brotherhood.
Who knew that American culture and society could so
aggrieve a person that he would devote a goodly portion of his hate-filled writing
and preaching to excoriating America? Greeley was a “dry” town, with nary a bar
insight (it became “wet” in 1969). It was a church-going town, too, and this is
what the easily offended Qutb probably saw as America’s greatest failing and
sin: they were virtually the only venues where men and women could meet and
socialize. It was also too “materialistic” and obsessed with sports. A Smithsonian
article from February 2006 noted:
Regarding the excesses of American
culture—vulgarity, materialism and promiscuity—Qutb expressed shock, but it
rang a bit hollow. “The American girl
is well acquainted with her body’s seductive capacity,” he wrote. “She knows it
lies in the face, and in expressive eyes, and thirsty lips. She knows
seductiveness lies in the round breasts, the full buttocks, and in the shapely
thighs, sleek legs — and she shows all this and does not hide it.””
These curvy jezebels pursued boys with “wide, strapping chest[s]” and “ox
muscles,” Qutb  added with disgust. Yet
no matter how lascivious his adjectives, the fastidious, unmarried Egyptian
could not convincingly portray the church dances and Look magazines he
encountered in sleepy Greeley as constituting a genuine sexual “jungle.” 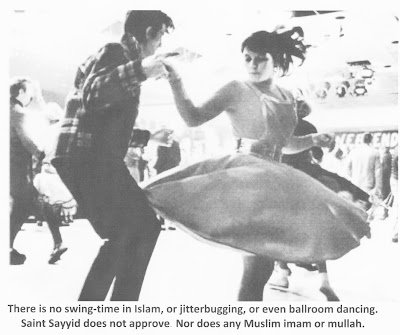 That battle scene scenario would be great material
for a new video game, or a big-screen Islamic epic, something on the order of a
Star Wars movie.  The Islamic Jesus could wield a light saber
instead of a genuine sword. Al-Buraq,
Mohammad’s winged horse with the head of a woman could play a role, too, picking
up thousands of unbelievers and dropping them from 10,000 feet. There would be
a CGI cast of millions of armed Muslims with zap guns against millions of Satan’s
soldiers flailing away at everyone with their katanas and tossing bacon
falafels at the enemy, causing great consternation among the devout and almost
causing Jesus to lose the battle. What a spectacle that would be!
There. That’s out of my system. And now back to our
regularly scheduled programming.

I might add that I’m merciless in my treatment of Islam
in my novel, The
Black Stone, a Cyrus Skeen detective novel, set in San Francisco in
1930.